Yorkshire Dales-based writer and editor John has the best job in the world: walking, and writing about walking.

John is editor of Lakeland Walker magazine, and has helped acclaimed Cumbria filmmaker Terry Abraham pen his new autobiography, A Life In the Mountains. 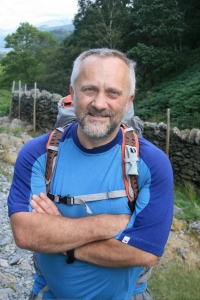 foot. John has been editor since January 2013.

Terry’s autobiography was published in May 2020 by Keswick-based Inspired by Lakeland. The book involved a series of lengthy and detailed interviews at various hostelries in the Penrith area and is described by John as a “conversational biography”.

John’s career in outdoor writing evolved gradually. In 1986, after completing the NCTJ’s one-year journalism training course at Darlington College of Technology, he undertook his first long distance walk – the life-changing Pennine Way – before joining the Todmorden News & Advertiser and Hebden Bridge Times, in the heart of the South Pennines, as a trainee reporter.

Surrounded by glorious countryside, he was drawn to covering outdoor matters. After two years he moved to the Halifax Evening Courier for a five-year stint as a senior sub-editor, during which he created the newspaper’s fortnightly outdoor column, Best Foot Forward. The blend of features, columns, events, reviews and more was inspired by his love of walking and his weekend activities: he was a volunteer countryside ranger in west Calderdale and a volunteer warden at the National Trust’s Hardcastle Crags estate. Best Foot Forward won him the Yorkshire Newspaper Society’s Columnist of the Year award for three successive years, between 1991–1993.

In 1994 he was appointed deputy editor of The Great Outdoors (TGO) magazine, the UK’s foremost monthly hill-walking magazine. While there he won three Awards for Excellence from the Outdoor Writers Guild (as it was then known), for technical (outdoor gear) features, in 1997, 1998 and 2013.

John has trekked and backpacked in India, Nepal, New Zealand, Peru, Finland, Slovenia and more, and in 2004 thru’ hiked the 2,653-mile Pacific Crest Trail.

He contributed to the book Classic Treks: The 30 Most Spectacular Hikes in the World (edited by Bill Birkett; David & Charles, 2000) and penned the guidebooks 25 Walks in the South Pennines (edited by Roger Smith, The Stationery Office, 1997) and 40 Short Walks in West Yorkshire (AA Publishing, 2011).

John left TGO in 2007 to make a new home in the Yorkshire Dales. He co-ordinated the cross-Scotland backpacking event The Great Outdoors Challenge from 2011–2016 on behalf of TGO, and organised the two-week South Pennines Walk & Ride Festival between 2008–2011. He also wrote for various outdoor titles, including TGO, Trek & Mountain, Walk (The Ramblers) and BBC Countryfile Magazine, while editing Lakeland Walker on a freelance basis, for Country Publications.

In 2014 he was invited to join Country Publications on a freelance basis, as editor of both Cumbria and Lakeland Walker magazines. Cumbria magazine was a runner-up in the O2 Media Awards Specialist Magazine of the Year in 2018 and 2019. He left the company – now known as Dalesman Publishing – in 2019 and continues to edit Lakeland Walker on a freelance basis from his home in the Dales village of Ingleton.